ADD TO MY FAVOURITE RECIPES 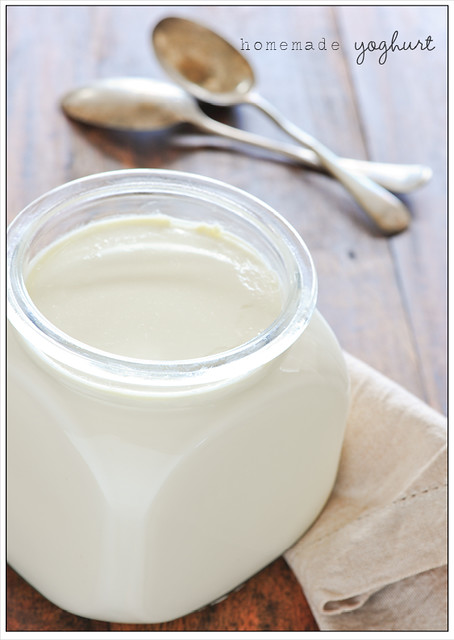 This may seem like a lot of yoghurt but it will keep for a month or longer in the fridge. Even though there are only 2 of us, we haven’t had any problems eating it up!

1. Whisk together milk and milk powder (if using) in a medium saucepan. Don’t stress if there are lumps.

2. Place over a medium heat and warm, stirring frequently until the temperature reaches 88C (190F).

3. Cool to 45C (110F). I pop the saucepan in the sink filled with cold water and a chiller brick or ice. But you can just let it cool more slowly if you prefer.

4. Sprinkle the culture powder into the main saucepan and stir well.

5. Pour into glass jars and top with a lid.

6. Place in a chiller bag or esky and leave in a warm place for about 12-24 hours. Or until the yoghurt is set and no longer runny. The longer it ferments the tangier the flavour. I generally do 24 hours. In winter I add a few jars filled with boiling water to keep the temperature higher.

no yoghurt starter culture – the best option is to use 2-3 tablespoons of commercial yoghurt (or your last batch). In theory probiotic capsules could be used, but there is a risk your yoghurt won’t set properly so I haven’t ever used them.

super creamy – double the milk powder or add in a cup of whipping cream (the cream will separate out on top).

different milk – goats or sheep milk should be fine. See the links above for dairy-free milks.

short on time – you can skip the sterilizing step if you aren’t worried about possible contamination in your milk. Or if using UHT milk. Just heat the milk to 45 (110F) and use as per the recipe. But I find the texture thicker and creamier when I sterilize so I take the extra time.

longer shelf life – sterilize your jars and lids by either putting through a hot dishwasher. Or put them in the oven and turn the oven on. Allow to heat to at least 150C (300F) for 10 minutes. Then allow cool before filling. My yoghurt lasts for months in sterilized jars.

yoghurt not setting – either the culture wasn’t viable (alive) or the temperature was too low for the bugs to grow. If you think it was the latter, just leave for another 12-24 hours (and try to move it to a warmer place). If it still hasn’t set after 72 hours it’s unlikely to happen so re-sterilize and start again with new culture. Anoher cause of a failed batch could be adding the culture when the milk is too hot. If it’s above 45C (110F) the yoghurt microbes will die. So make sure you wait until it’s the correct temp before adding the culture.

mould growing on top – next time be more thorough in sterilizing your jars and lids. For now if it’s white mould just scoop of and discard. I’ll still eat the yoghurt underneath. If the mould is coloured best to discard the whole lot.

too tangy – you’ve fermented for too long. Next time try a shorter ferment. For now adding a little sugar or jam can help balance the acid.

no thermometer / temperature probe – if you want to make yoghurt on a regular basis it’s worth investing in a thermometer. I use mine for meat cooking as well. But for now just heat the milk until steam is rising off but it isn’t actually simmering. And then cool the milk until it feels the same as body temperature before adding the culture.

burnt / smoky – It’s important to stir the milk as you heat it so it doesn’t burn on the bottom. If it happens I still ferment the yoghurt as normal but then use it for savory cooking in dishes where some smoky flavour is welcome.

Recipes to Use Your Yoghurt

A must! Will keep for months in the fridge (if you sterilize your jars) and will keep for a few weeks if you don’t sterilize. Don’t freeze unless you’re making frozen yoghurt and want to eat it frozen.